We are angry, saddened, confused and ultimately bummed.

As far as why our show was cancelled we are not entirely sure. We do know that several shows got the axe, although we still haven’t heard exactly which ones. I would speculate that perhaps the radio station, under new ownership earlier this year, decided to cut out Spice Radio altogether. I have also heard rumors of Spice going back to the all dirty talk/phone sex format…which is something I refuse to do, phone sex for free on the radio, in fact I don’t even think I could do it. I have too much to say, too many stories, too many opinions, too many rants…

Although the decision to cancel our show does makes us very sad, I have to say it’s not entirely a shock to me. I have been through this four different times when the station has decided to change up programming. Each time I have been asked to do a new show. Somehow I am betting I won’t be asked back again, but really, one never can tell right? I have loved being part of Playboy/Spice radio all these years and absolutely adore doing radio. You can bet that no matter what radio will be a part of my life…just as it always has been. Whether it’s Playboy, Spice, a podcast or some other network.

Thank you to all of your who have been faithful listeners, even regular callers, and we hope you will follow us to wherever we end up doing radio… more on that soon…

A brief (or not so brief) history of me and radio:

I went to college for Broadcast Journalism…I always wanted to be a television newscaster, but ended up falling in love with radio. Funny how life kinda goes in circles, huh?

Throughout my career I have been a guest on SO many radio shows! Howard Stern, Mancow, Lewis and Floorwax and countless others. Including co-hosting for a week on the Lamont and Tonelli Morning Show on KSJO in San Jose.

I originally was a regular guest back when Nightcalls first went on the air on XM Radio back in…2001? 2002?

I believe it was about 2003 I started Kylie Live on internet station KSEX Radio (those shows will soon be archived on my newly redesigned website at www.kylieireland.com). During this time I became sort of a regular last minute fill-in whenever either of the Nightcalls hosts couldn’t be on the air. (It didn’t hurt that I lived 10 minutes away from the station!) There were several occasions when a host would leave the show and they would hold auditions… I was always one of the girls auditioning. I got beat out for that host spot by Christy Canyon and later, Ginger Lynn…both absolute legends in the adult industry and friends of mine so that was totally understandable. 😉 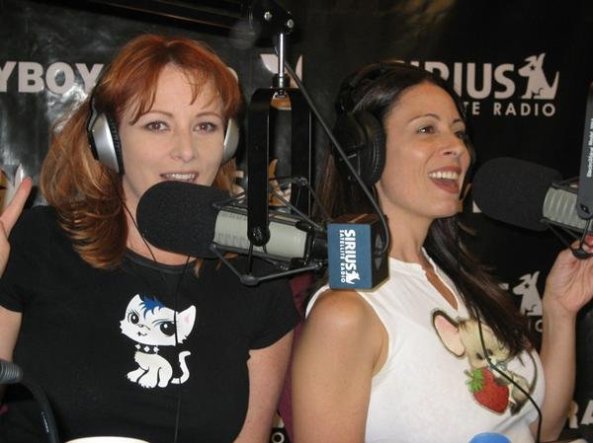 In between there were various podcasts from my home, posted exclusively to my website.

This was followed by my favorite creation, The Friday Night Threeway, with Derrick Pierce, which ran for nearly a year and a half.

The next programming change in 2010 brought along a radio show that I loathed in the beginning but learned to love…The Jerkbox. Live every Saturday and Sunday evening on Spice Radio (the sister station to Playboy) for four hours; it was not an easy task, doing radio alone on the air (there is no one there to laugh at your jokes!) And the callers on weekends! Ack…Don’t even get me started. I started referring to myself as the Art Bell of Spice Radio since I would get so many crazies calling into the show.

When The Jerkbox ended in early 2012 due to another programming change, I was handed a new show, but this time it was different. I missed Derrick and The Friday Night Threeway but knew they would never let me have him back…so I asked for one of my favorite guests; the vibrant, beautiful and feisty Raylene. In April of 2012, Let’s Try Anything was born.

Now, here I am, once again at a crossroads of my radio career…but just wait. Something new is on the horizon…

3 comments on “Let’s Not Try Anything Anymore…”