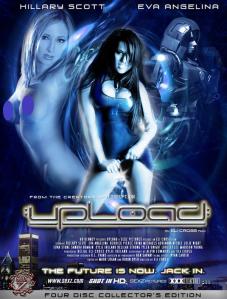 The story is, after we wrapped filming Upload for SexZ Pictures in late summer of 2007 we were all a bit loopy. We had worked our tails off for months prepping the movie, followed by the 20-day shoot. That’s a long shoot for porn! When it was over I got the crazy notion in my head that I needed to make a sock puppet version of Upload for the DVD Extras. So I did. I wrote the sock version of the story, even made some crude storyboards. For days we (me and the prop creator) worked on the various puppets, styling them after each character in the movie and attempting to capture each actor’s likeness. Then with a few friends – Aiden Starr, Eli Cross, Peter James Smith, Ren Savant – lending a helping hand, we set out to shoot what became a 12 minute version of Upload which we titled Laundry Load.

You don’t need to have seen Upload to understand the Sock Puppet version, although it might be funnier and it will make a whole lot more sense.

Funny thing is, when it came time to send the rough cut of Upload to the owner of SexZ Pictures so he could view the $350,000 masterpiece he funded, we actually sent him Laundry Load first just for a laugh.

Error: Twitter did not respond. Please wait a few minutes and refresh this page.